The Sky is Everywhere - Jandy Nelson

The Sky is Everywhere is the YA debut novel by American author, Jandy Nelson. It was released on 7th June 2010 by Walker Books UK and is 368 pages long. Thanks to Walker Books UK for sending me a copy for review. 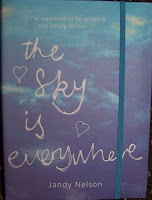 Lennie Walker's older sister Bailey was always the one in the spotlight. She had the perfect relationship and a promising career as an actress. Lennie was quite happy to be the quiet sister, the one living in the background but when Bailey dies, she finds herself lost and struggling to deal with her own life, as well as the lost of her sister and best friend.
When Lennie goes back to school, she realises just how much has changed. There's a new boy, Joe, that everyone is talking about, sat in her chair when she goes to band practise and Bailey's boyfriend Toby is always hanging around the house but Lennie doesn't know how to deal with everyone around her. As Lennie tries to deal and work through her grief, she feels connected to both boys. Sharing the love for her sister with Toby and the love of music with Joe, Lennie's world gets more complicated than she ever could have imagined and Bailey's voice is always in the back of her mind, trying to remind her who she really is.

What I thought
The Sky is Everywhere has to be one of the most beautiful books that I have ever read. I certainly wasn't expecting to be as in love with it as I am now, even after hearing so many good things about it. I was so glad to not be disappointed by this book after it was surrounded by such a big hype.

If you read the back of the book, it is clear that the story is going to deal with the topic of loss and grief, which will always be a hard topic to address. Jandy Nelson managed to write this beautiful story and characters without ever losing who they really were or what they were feeling. Each character that was connected to Bailey deals with her death in different ways which sometimes results in clashes between them. I can't say that I could connect with Lennie on such a personal level, not having lost anyone this close to me, but I could certainly feel what she was going through and sympathise with her and her situation. The part that I could connect with though was her relationship with her sister. I have always felt as though I have lived in my elder sisters shadow a little bit so I can only imagine what Lennie would feel once Bailey had died and she was left all alone and getting a lot of attention.

Lennie has two really difficult relationships to deal with from the very start of the story. As soon as Joe appeared, I knew that I was going to love him. Coming from Paris, I knew that there was going to be something very sensual and amazing about him that I was going to fall in love with straight away. The blossoming relationship between him and Lennie was delightful and I thought it was just what Lennie needed. They instantly had a connection and amazing chemistry as they had so much in common and a lot that they could share. Their connection was so believable from the off and I couldn't wait to find out how things were going to progress between them.

What Joe doesn't know is that Lennie also has a strong connection with Toby and because of this, I felt so sorry for him. I was really apprehensive about this part of the story because I wasn't sure that it was going to work or feel right but it did in ever single way. I could understand what and why Lennie was feeling what she did towards Toby and vice versa. The problems they shared were perfectly in context with the rest of the story and only enhanced it in my opinion. Lennie and Toby also had passion and chemistry but in a completely different way to what she has with Joe.

Lennie, Toby and Joe, along with some of the other characters were extremely well written. The enthusiasm and detail that has gone into creating such interesting characters is so clear that you cannot help but fall in love with them all. Lennie's Grandmother and Uncle also have a big part to play in the story and are two very unique characters. They really brought something different to the table as well as a lot of humour. I loved that Gram was slightly eccentric and nothing like my Nanna and Big, Lennie's Uncle was so strange that I wanted him as my own Uncle. Both of these characters added a fair amount of humour to the story in places due to their personalities which helped give the story a lighter feel at times which I felt was needed so that it didn't become depressing.

The story is very well paced, taking enough time to really develop what is happening to Lennie and those around her. Everything that I could have possibly wanted to know was covered and in great detail so I never felt as though I missing anything or important facts were left out. Everything about the structure of this story drew me in and kept my attention the whole way through. As the story is told from Lennie's point of view, it makes it feel very personal and almost as though it is like reading her diary of what she is feeling and how different events affect her. 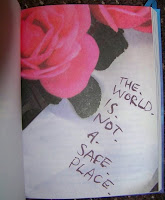 The way that this book is presented is just as beautiful as the story itself. The text is printed in blue, to match the title and cover of the book. I find it easier to read in blue (I actually write everything in the same colour), compared to black, so I was very pleased with this choice. Throughout the book are pictures of handwritten notes between Lennie and Bailey and poems that Lennie wrote on different things. I adored this aspect of the book as it was unlike anything I had ever seen in this type of book. This was something that added to the uniqueness of The Sky is Everywhere and something that brought the realisation of Lennie and Bailey's relationship to life. As we don't get to see anything of their relationship before Bailey died, this was a great way of learning about their past and just how close they really were. I actually went through the book again after I had finished reading it just so I could look at these parts again.
The Sky is Everywhere is one of the most impressive debut novels I have ever come across. Jandy Neilson clearly poured her heart and soul into this story, making the words come alive on every page. It's beautiful. It's sad. It's heart-warming. It's so much more than all of those things. This was another book that I planned to read a couple of chapters of at 11pm that kept me awake until gone 3am because I couldn't have put it down if I had tried. Everyone needs to read this book!

Posted by Lyndsey OHalloran at 15:19

Wow--that was an absolutely stellar review. Think I'll have to check that book out. :)

amazing review hun, im so glad that you enjoyed it, agreed, what she had with Toby had felt right to, and i loved the beautiful illustrations so well done :)

Great review... I must ger round to reading this... I love the cover too, it's so unique!

I think it's a beautiful book, too. Glad you liked it :)

This really is a beautiful book, both in presentation and in plot. Loved it.