In My Mailbox is hosted by The Story Siren to show what everyone has been recieving or buying each week.
I have had a completely amazing week and was somehow lucky to recieve something bookish every day except for Saturday.
Monday

On Monday I recieved The Ghost and The Goth by Stacey Kade from Dwayne at Girls Without A Bookcase.
Synopsis
After a close encounter with the front end of a school bus, Alona Dare goes from Homecoming Queen to Queen of the Dead. Now she’s stuck here in spirit form with no sign of the big, bright light coming to take her away. To make matters worse, the only person who might be able to help her is Will Killian, a total loser/outcast type who hates the social elite. He alone can see and hear her, but he wants nothing to do with the former mean girl of Groundsboro High.
Can they get over their mutual distrust—and this weird attraction between them—to work together before Alona vanishes for good and Will is locked up for seeing things that don’t exist?
Tuesday

Two bookmarks (1 signed by Jennifer Laurens) and 4 press release picture things with descriptions on the back. These came from Grove Creek Publishing.  This was a nice surprise and I had no idea it was coming or where it even came from at the time.

Wednesday
Wednesday's post was the one I had been waiting for and what I had been checking for every day. I was soooo excited when I saw the US postal marks on the packaging as I immediately knew what it was going to be. A HUGE thanks to Lacey Weatherford for sending me the first two books in her 'Of Witches and Warlocks' series. Lacey also sent me a couple of bookmarks, one for each book, and was so nice to sign both copies for me. Lynsey at UK Book Tours is putting both of these books in so head over there if you want to be a part of that. 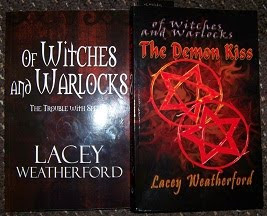 Book 1: The Trouble With Spells
Portia Mullins had always lived the life of a normal teenager, up until her sixteenth birthday. She is then informed by her grandma that she is actually a witch who is a descendant from a long line of witches and warlocks. After overcoming her disbelief she finds that being a member of the coven comes with one great perk in the form of the schools handsome bad boy, Vance Mangum. Vance and Portia have an immediate connection as a budding romance begins, only to be threatened by turbulent skies on the horizon as Vance's checkered past rears its ugly head to haunt them. Portia is forced to use her untried powers in defense of everything she loves in a desperate attempt to hold on to the one thing that really matters in her life.
Book 2: The Demon Kiss
Can someone else's past come back to bite you? After being drained of nearly all the blood in her body, novice witch, Portia Mullins, wakes up to find that her warlock boyfriend, Vance Mangum, has fled in search of his demon father. Determined to keep him from facing the evil alone Portia follows after him, unknowingly setting herself on the path of a new adventure that will take her, Vance, and their coven over international borders, into a foreign place where they will discover that the black magic which awaits them is far worse than they ever imagined. Portia finds herself tangled up in a web of lies and deceit in another's quest for demonic power in the excitingly romantic second paranormal novel in the Of Witches and Warlocks Series, The Demon Kiss.
I actually read both of these books on Wednesday and they were both amazing. The whole of next week is being dedicated to the series so be sure to come and check out what is going on!
Thursday

I recieved Scarlett Dead for review from Headline. Although this isn't normally the sort of thing I would read I love the sound of it and the fact that it is illustrated. I am also giving away one copy in my first ever giveaway. It is open internationally to anyone over the age of 13 so if you want to enter, here is the link!
Friday

The lovely people at Bloomsbury sent me this fabulous package with my first batch of books for review. Unfortunately, I have had Need and Captivate for ages now so these will be going into a giveaway at some time or another. The other two books I got are My Love Lies Bleeding by Alyxandra Harvey and Pastworld by Ian Beck. Both of these look fantastic so I'll hopefully be able to start at least one of them next week!

So there we have my fantastic IMM this week. What did you get in yours?
Posted by Lyndsey OHalloran at 20:59

Wow! So many great books this week! Hope you enjoy them all!

Great books this week- I got Captivate and My Love Lies Bleeding from Bloomsbury too :)Stop by my IMM here

Oh, nice! Lots of great stuff this week. I need to make a trip to the library... enjoy your books!

So many good looking books!!

I loved Need and Captivate!!!

Looking forward to your review of my love lies bleeding!

kirsty at the overflowing library said...

some awesome books this week!

Can't wait to see what you think of The Ghost and The Goth.

Awesome books, Lyndsey, I LOVE Bloomsbury! They are so awesome! Those bookmark-y things are all of books by Jennifer, which means they are from her..because I got a signed bookmark a while ago too..sent via Grove Creek Publishing ;)

Lots of great sounding books, I can't wait to here what you think of The Ghost and the Goth (sounds fab).

I love Bloomsbury - they sent you a great selection! Also, Scarlett Dedd.. woohoo! Hope you enjoy them all :)

You had a great week this week! I hear good things about Need and Captivate so I look forward to reading your reviews of them:)

Wow, great week! I haven't read Need or Captivate but everyone seems to be raving about them! Happy reading :).

I really want to read the Ghost and the Goth... I hope you enjoy!
Here is my mailbox for the week <3

I hope that you enjoy your books. Happy reading. Check out my mailbox

That's amazing! So many books for review :)
I can't wait to read your reviews of them all.