In My Mailbox is hosted by The Story Siren to show what everyone has been recieving or buying each week. All of my links either go to the publishers' website or goodreads if I have bought them.
For Review: Headline

Glee - The Beginning - Sophia Lowell (Release Date: 5th August 2010)
All great performances deserve a warm-up! Enroll early at McKinley High to find out what went on before New Directions was even a glimmer in Mr Schuester’s eye. When did Rachel first decide Finn was more than just a jock? When did Puck and Quinn start their secret romance? And how did the fledgling Glee Club function without a fearless leader? Hint: It wasn’t exactly a perfect melody.
Break out the gold stars and refill the slushies: it’s time to find out what happened to all your favourite characters before the show-mance began

The Radleys - Matt Haig
Meet the Radleys: Peter, Helen and their teenage kids Clara and Rowan. An everyday family who live in a pretty English village and juggle dysfunctional lives. So far, so normal. Except, as Peter and Helen know (but the kids have yet to find out), the Radleys happen to be a family of abstaining vampires. When one night Clara finds herself driven to commit a bloodthirsty act of violence, her parents need to explain a few things: why is their skin is so sensitive to light, why do they all find garlic so repulsive, and why has Clara's recent decision to go vegan had quite such an effect on her behaviour...? But when mysterious Uncle Will swoops into the village, he unleashes a host of shadowy truths and dark secrets that threaten to destroy the Radleys and the world around them.
City of Bones (The Mortal Instruments 1) - Cassandra Clare
Clary Fray is seeing things: vampires in Brooklyn and werewolves in Manhattan. Irresistibly drawn towards a group of sexy demon hunters, Clary encounters the dark side of New York City - and the dangers of forbidden love.
The Sky is Everywhere - Jandy Nelson
Seventeen-year-old Lennie Walker spends her time tucked safely and happily in the shadow of her fiery older sister, Bailey. But when Bailey dies abruptly, Lennie is catapulted to centre stage of her own life - and, despite her nonexistent history with boys, suddenly finds herself struggling to balance two. Toby was Bailey's boyfriend; his grief mirrors Lennie's own. Joe is the new boy in town, with a nearly magical grin. One boy takes Lennie out of her sorrow, the other comforts her in it. But the two can't collide without Lennie's world exploding...
The Knife of Never Letting Go - Patrick Ness
Imagine you're the only boy in a town of men. And you can hear everything they think. And they can hear everything you think. Imagine you don't fit in with their plans... Todd Hewitt is just one month away from the birthday that will make him a man. But his town has been keeping secrets from him. Secrets that are going to force him to run...
Amazon 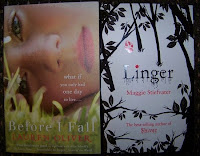 Before I Fall - Lauren Oliver
What if you had only one day to live? What would you do? Who would you kiss? And how far would you go to save your own life?

Samantha Kingston has it all—looks, popularity, the perfect boyfriend. Friday, February 12th should be just another day in her charmed life. Instead, it’s her last. The catch: Samantha still wakes up the next morning. In fact, she re-lives the last day of her life seven times, until she realizes that by making even the slightest changes, she may hold more power than she had ever imagined.
Linger - Maggie Stiefvater
It's about after. What happens after you discover there are werewolves in the wood, after you've fallen in love for the first time, after you've lost what you think you can't live without, after you've become someone you can't live with.

I know a lot of you wil have gotten Linger this week but what else did you get in your mailbox?
Posted by Lyndsey OHalloran at 22:15

I just read City of Bones recently, it's not bad! And I really, really want to read Before I Fall! :)

Envyingg the Radleys! You got awesome stuff from Walker this week! :) Enjoy ^.^

I'm jealous! I want the Glee book! My sister would love me forever if I gave her that! Linger's UK version is soooo pretty. Does it have green ink like the US one does?

I nearly bought Linger the other day... It sounds like it's a good read.

I hope you enjoy your books :)

Great books this week - hope you enjoy! Hope my copy of Linger is here tomorrow. Why is it soooooo slow!!??

Great book week... I really hope you love Before I Fall, I thought it was amazing.

Before I Fall is AMAZING read it soon! My IMM is here

Wow, some great books there. The Radleys looks fantastic I'll have to keep an eye for that. THe Sky is Everywhere is so amazing I really hope you enjoy it. :)

I was hesitant to read Before I Fall because of all the hype it got but was pleasantly surprised but it. Happy reading!

Oh man, you have Linger. So, so envious. Actually, your whole collection of reads are fabulous! Hope you enjoy them!

What a great collection of books :D Was tempted to buy The Radleys this week so will look forward to your review!

City of Bones is one of my all-time favorites, I love Cassie Clare. I've been wanting to read The Sky is Everywhere as well - maybe I'll get to it this fall.

the glee book looks so cute!

Some great books there in your pile--I've heard good things about The Knife of Never Letting Go.

Following back from the Hop--looking forward to your reviews! :)

Love, Love, Love City of Bones. I hope you like it too!

You got the UK edition of The Sky is Everywhere! I have the US hardcover. If I found the UK edition first, I would've gotten it. It's so nice because it looks more like a scrapbook than a book. Hope you enjoy reading Before I Fall because I loved that one.

Glee looks pretty good, I just ordered a copy of one of their books. I also need to read The Radleys and The Sky Is Everywhere, they've been on my tbr stack of way too long.

Awesome book week. Before I Fall & The Sky is Everywhere are fantastic. Happy reading