In My Mailbox is hosted by The The Story Siren to show what everyone has been recieving or buying each week.
Books
Well...this week I have been quite a naughty girl and bought far more than I should have. 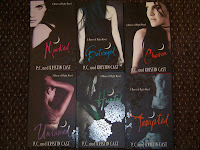 I have been tempted by The House of Night series by P.C and Kristin Cast for quite a while now but there has always been so many other books that I preferred to spend my money on. During my break at work today I took my usual trip to Waterstones to see what there was and I found these in the BOGOF offer. They were not there the other day when I looked. I couldn't resist these 6 books for the bargain price of £21. One of the main reasons I bought them today were because of the coloured edges of the pages. W H Smiths never have these versions in, let alone on offer. I know there is a new one out but I'll wait until it goes to paperback. 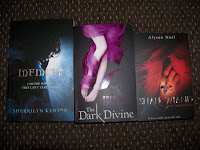 Infinity - Sherrilyn Kenyon
Atom - Released 27th May 2010
Teenager Nick Gautier thinks he knows everything. Streetwise, tough and savvy, his quick sarcasm is renowned. But his whole world is suddenly turned upside down on the night his best friends try to kill him. Saved by a mysterious warrior, Nick is sucked into the realm of the Dark-Hunters - immortal vampire-slayers who risk everything to save humanity - and he quickly learns that the human world is only a veil for a much larger and more dangerous one that's filled with all kinds of evil. However, before he can even learn the rules of this new world, his fellow students start turning into flesh-eating members of the undead. Nick knows he's in real danger and he soon has a lot more to deal with than starting high school: he's under pressure to hide his new friends from his mother and his chainsaw from the principal while trying to impress the girl he has a crush on all without getting grounded, suspended...or killed.
I'd just like to say that I have read this one already but putting off writing the review for now. It wasn't at all what I was expecting, in a good way, but I'm still a little bit lost for words. Hopefully they will come to me this week.
The Dark Divine - Bree Despain
Egmont Books Ltd - Released 5th July 2010
A prodigal son. A dangerous love. Haunted yearning...Grace Divine, daughter of the local pastor, always knew something terrible happened the night Daniel Kalbi disappeared and her brother Jude came home covered in his own blood. Now that Daniel's returned, Grace must choose between her growing attraction to him and her loyalty to her brother. As Grace gets closer to Daniel, she learns the truth about that mysterious night and how to save the ones she loves, but it might cost her the one thing she cherishes most: her soul.
Shadowland - Alyson Noel
Macmillan Children's Books - Released 1 July 2010
At the start of this breathtaking novel, Damen and Ever travel to Summerland in search of an antidote to reverse a powerful poison. But instead of the cure they seek, they find something far more sinister: the truth about their existence and the fate lying in wait of an immortal’s soul.
Now, with Damen fighting to save them from the Shadowland, Ever turns to magick, hoping to break Damen’s curse. Along the way Ever encounters the mysterious Jude, finding herself drawn to him in a way that will test her love for Damen like never before . . .
Other stuff
As much excitement as new books bring me, post from authors is much better. 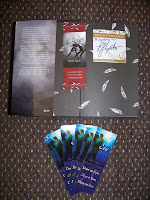 I was extremely lucky to win a signed bookplate and a bookmark from Becca Fitzpatrick on Twitter a couple of weeks ago and Heidi R. Kling sent me 7 bookmarks (1 signed). I'll be giving a few of these away at some point.
What did everyone else get this week?
Posted by Lyndsey OHalloran at 17:24

You got some awesome stuff in the mail! Can't wait to read your review of Infinity. Enjoy!

I was also tempted to buy HoN series but my library has the entire series so I thought I'd just borrow from there :D Enjoy them!

I showed the most restraint ever in Waterstones when I saw the BOGOF offer and only bought two! Look forward to see what you thought of The Dark divine as that was my 'free' choice!

awesome books!! i want to read infinity too!

Great books! I've been lusting after the HON with the coloured pages since they came out and I want to read Infinity too. Am trying to restrain myself from heading over to Waterstones.com and ordering them all :)

p.s. sorry for the deleted post above ... was trying to get my profile to display!

Congrats on your wins! I am loving your new House of Night collection!

Here is my IMM! Plus, I have a new meme that I'm trying to start: When I'm Not Reading. Hope you can check it out. Enjoy your books!

Great week! I enjoyed Dark Divine and Shadowland and hope you do too. You have some sweet reading in your future! Here is what I got.

Ha! First the Morganville series and now House of Night! :) I'm already a fan of the House of Night series, and just last week I got Burned, the latest in the series. Hope you enjoy them!