In My Mailbox is hosted by The Story Siren to show what everyone has been recieving or buying each week.
For Review

Wintercraft - Jenna Burtenshaw (Released 13th May 2010)
A big thanks to Headline Publishing for sending Wintercraft to get me started.
When Kate Winters' Uncle is taken by the wardens of war-torn Albion, just as her parents were ten years earlier, she is determined to rescue him.
But Kate is being hunted by a far more dangerous enemy. Silas Dane - a killer with a haunted past - has recognised Kate as one of the Skilled who have the rare ability to see through the veil between life and death. He's determined that she'll help end his own personal nightmare; unfortunately, he isn't the only one with plans for her...
As te Night of Souls approaches, a secret hidden deep beneath a graveyard city holds the key to the fate of Kate, those she loves and even Albion itself... the lost book of Wintercraft.
Bought 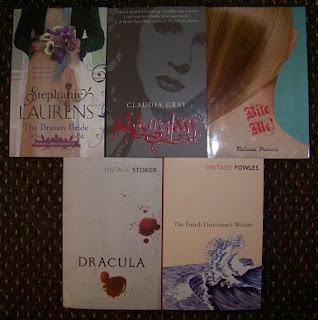 Hourglass - Claudia Gray
Bestselling author Claudia Gray’s Evernight series continues. In Hourglass, Bianca and Lucas have found a way to be together. But it means lying to the people who care about them the most.
After escaping from Evernight Academy, the vampire boarding school, Bianca and Lucas seek refuge with Black Cross, the elite group of vampire hunters led by Lucas’s stepfather. When Bianca’s close friend—the vampire Balthazar—is captured by Black Cross, Bianca knows she has to do whatever it takes to save him. But at what cost? (From GoodReads)

Bite Me! - Melissa Francis
AJ Ashe isn't your typical seventeen-year-old vampire—as if there is such a thing! She's stuck in the middle of a huge fight between her two BFFs. Her ex-boyfriend—whom she's still totally in love with, by the way—is now her stepbrother. A former classmate—who, um, she may or may not have turned into a vampire—is stalking her. And now, apparently, the fate of humankind lies in her little undead hands. What ever happened to the good old days, when all a vampire girl had to worry about was the occasional zit and hiding her taste for blood? (From GoodReads)

The other books that I bought this week were:
Dracula - Bram Stoker (For University)
The French Lieutenant's Woman - John Fowles (For University)
The Brazen Bride - Stephanie Laurens (Although I love YA, I still have a thing for romance novels. That's the girly girl in me coming out)

What did everyone else get and what do you think of this weeks IMM?
Posted by Lyndsey OHalloran at 15:09

You have such a varied taste in books! Wintercraft for the life of me I haven't read! Enjoy :)