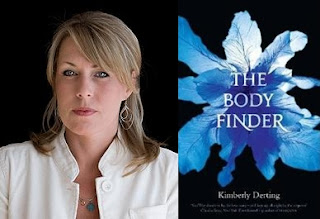 Kimberly Derting's novel, The Body Finder, which was released over here in the UK on 11th November and has already had high praise in the US. In celebration of this recent release, I have an interview with the author herself on the blog today!
Describe your book in 5 words.
Dead bodies and new love.
Where did the inspiration for The Body Finder come from?
Oh boy, here we go….my husband loves it when I get this question. My husband will jokingly (I think!) say that he is “the wind beneath my wings” or “my muse” and sometimes even my “co-author” all because he was the one who first said: “What if there was a kid who could find dead bodies?” Of course, what he conveniently forgets is that his idea was for a middle-grade boy adventure…and that I’m the one who actually wrote the book!
Were any of the characters or their traits inspired by people you know?
The characters themselves aren’t actually based on anyone, although I may have stolen a trait, a mannerism, and maybe even an entire scenario (namely a situation with Chelsea in Desires of the Dead) from my friends and family. The best part is letting them all try to figure out what I’ve taken from each of them. I’ll never tell!
If you could have some kind of gift like Violet does, what would you want it to be?
I’m positive it would NOT be finding dead bodies! I’ll leave that to Violet because I’m more of the run-from-danger kind of girl. But, I’ve always thought it would be cool to fly. That way, I could be a fly-from-danger kind of girl, because, really, I hate running!
How did you go about researching for The Body Finder?
My research for the The Body Finder was mostly focused on how the local Police and Fire Departments would work together when someone went missing or if a dead body was found. Since I already had friends in the Fire and Police departments, it was a lot fun picking their brains. Plus, I named them in my acknowledgements so if I got any facts wrong, you can totally blame them!
Some authors do certain things while they write like listen to music etc. Do you have any rituals like this of your own?
Mine are less ritual and more addictions. I must have tea and Skittles (or some other handy sweet treat). Oh, and comfy sweatpants…which are just as attractive as they sound.
Are there any other YA authors that you admire?
The easier question might be: are there any that I don’t admire? I love this community so asking me to choose is almost as hard as asking me to pick a favourite child!
Fine, here are some of the people who I think are brilliant and are super-fab writers to boot: Melissa Marr (the Wicked Lovely series), Kami Garcia & Margaret Stohl (Beautiful Creatures), Kelley Armstrong (The Darkest Powers trilogy), Becca Fitzpatrick (Hush, Hush), Carrie Ryan (The Forest of Hands and Teeth), Aprilynne Pike (Wings), Sophie Jordan (Firelight)…and about 100 others.
What is your favourite book of all time and why?
This one is easy: To Kill a Mockingbird by Harper Lee. Best. Book. Ever!
The sequel, Desires of the Dead is being released in 2011 but will there any more books in this series?
Right now, just the first two have been confirmed but who knows what might happen in the coming weeks! Let’s just say that I would love to continue the series. Trust me, if there are any concrete developments, I will be posting the news all over my website, my blog, Twitter, and Facebook! I may even tattoo it on my husband’s forehead!!
Thanks Kimberly!
Posted by Lyndsey OHalloran at 00:30

I'm reading this book just now, so this interview is current to me. What a great interview. Its always good to hear where people get their inspiration from. Great post x

Kim is so amazing! I love The Body Finder and am so excited that the Desires of the Dead release date got moved up. Great interview!

Great interview! Wish I could think of great questions like that LOL