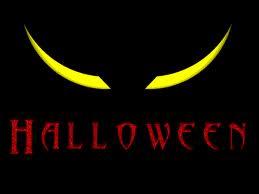 Ok so I know Halloween has been and gone (as well as Bonfire Night) but I promised that I would post pictures of the insane night that was Zombie Night! I know I have told a few of you that it was a pretty insane night, not getting in until stupid o'clock and also drinking WAY too much so you will have to excuse the state of us in some of the pics.

Kate and her boyfriend Si before and during getting ready.

Me, Ben and Laura 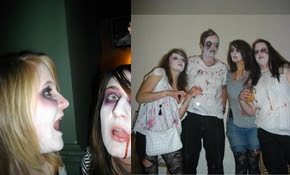 Me and Kate
For my zombie look I decided to be a bit Victorianish or something along those lines. I just wanted to wear something with lace on it to be honest. My top got ran over with a car, splattered in blood, black face paint and then slashed with a knife. Attractive huh? Everyone apart from Ben piled round to my place before going out for pre drinks and for me to help with the make up. I am far from fantastic or trained but I used to do make up for weddings so they all wanted me to have a go. I did both Kate and Si's make up and my own of course but I was actually so impressed with myself. Si ended up with a head wound which looked pretty grewsome and some terrible black eyes. Kate had a gunshot wound in her neck and some very hollow looking eyes. Me...well I just looked awful I think. I had a head would, mouldy rotten arms and a gunshot wound in my chest. There was blood and a mixture of colours all over me and everytime I moved it seemed to spread. Can you imagine what I looked like at the end of the night? I'm glad I was too drunk to see it.
So there we go! I left out the ones where I look far too drunk for my own good though but that's me as a zombie! It took me a good 3 hours to look that terrible which I wasn't very impressed with as it takes me less time to get ready for a normal night out.
What do you all think of my zombie look??
Posted by Lyndsey OHalloran at 21:26

Wow you all look so great.
Lyns you had a super good hair day for those photos :D