In My Mailbox is hosted by The Story Siren to show what everyone has been recieving or buying each week.
Usborne 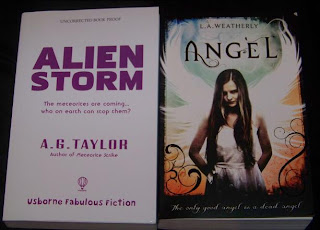 For Review: Angel - L A Weatherly
In a world where angels are beyond redemption, Alex thinks he's found one that might deserve mercy. Alex is a ruthless assassin - of angels. Forget everything you've heard about them before. Angels are not benign celestial creatures, but fierce stalkers whose irresistible force allows them to feed off humans, draining them of their vitality until there is barely anything left. As far as Alex is concerned, the only good angel is a dead angel...until he meets Willow. She may look like a normal teenager but Willow is no ordinary girl. Half-angel, half-human, Willow may hold the key to defeating the evil angels. But as the hunter and the hunted embark on an epic and dangerous journey and Willow learns the dark and terrifying secrets of her past, Alex finds himself drawn to Willow...with devastating consequences. 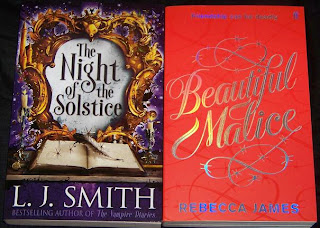 Beautiful Malice - Rebecca James
So. Were you glad, deep down? Were you glad to be rid of her? Your perfect sister? Were you secretly glad when she was killed?

Following a terrible tragedy that leaves her once-perfect family shattered, Katherine Patterson moves to a new city, starts at a new school, and looks forward to a new life of quiet anonymity.

But when Katherine meets the gregarious and beautiful Alice Parrie her resolution to live a solitary life becomes difficult. Katherine is unable resist the flattering attention that Alice pays her and is so charmed by Alice’s contagious enthusiasm that the two girls soon become firm friends. Alice’s joie de vivre is transformative; it helps Katherine forget her painful past and slowly, tentatively, Katherine allows herself to start enjoying life again.

But being friends with Alice is complicated – and as Katherine gets to know her better she discovers that although Alice can be charming and generous she can also be selfish and egocentric. Sometimes, even, Alice is cruel.

And when Katherine starts to wonder if Alice is really the kind of person she wants as a friend, she discovers something else about Alice - she doesn’t like being cast off.

Night of the Solstice - L J Smith
In another age, the pathways connecting Earth to the Wildworld were sealed, forever separating humans from the shimmering parallel universe where legends still live. A great sorceress, Morgana Shee, guards the solitary gate between the worlds. She alone holds the secret of Fell Andred, her mansion built directly on the Great Coastal Passage, whose mirrors are the last doorways to enchantment.


So that's what I got this week. If you have read any of them already please let me know what you thought!
Posted by Lyndsey OHalloran at 10:48

kirsty at the overflowing library said...

i need to get beautiful malice - awesome books!

Yay! Hope you enjoy the books I sent! Angel and Beautiful Malice are amazing. I'm pretty sure you will love them both! :)

I read a great review on Beautiful Malice last week so I'll be really interested to hear what you thought next.

Here's an invite to Aisle B
http://aisleb.tumblr.com/post/1234388612/mailbox-monday-in-my-mailbox

Beautiful Malice and Angel are some of my favouritest reads of the year..hope you enjoy the! :)

LOVED Beautiful Malice...and I'm half way through Angel and loving it!

Great books this week! Looking forward to your thoughts on Angel! I like the synopsis. Hope the story is good. =)

You have great reading to look forward to! My IMMB is here Have a great weekend!
Brandi from Blkosiner’s Book Blog

I've got Beautiful Malice on my pile - might have to bump it up a bit having seen the comments here. Dying to get my hands on Angel too - my local Waterstones haven't got it in yet. Happy reading!