Today is the first stop on the blog tour for Joss Stirling's Finding Sky. I am so happy to have an interview with Joss on the blog today. Enjoy :D

Where did your research for 'Finding Sky' take you?
Colorado and Las Vegas. I loved the first – the mountains are spectacular. I saw most of it from the train which crosses the Rockies from Grand Junction to Denver. Las Vegas I disliked intensely, though I admit to a horrified fascination with the artificial world created in a desert. Sky has picked up some of my feelings.
What was the most enjoyable part of researching abroad and where did you enjoy the most?
Meeting Americans on a ranch in the Rockies – we had cook-outs and hayrides and lots of riding right up above the tree line in the mountains. It wasn’t ski-ing season – which is just as well because I would be about as good as Sky at that.
You went white water rafting, did you put your own feelings into what Sky experienced?
No, because I loved the rafting, expertly led by our golden Viking of a guide, Travis. By contrast, Sky has a difficult time and comes out feeling very angry. I was inspired to write the episode of her going overboard as we did get involved in a serious rescue situation when another party of fairly elderly people capsized in a rapid. Our boat helped pull one lady out – she was shaken and grazed much like Sky. 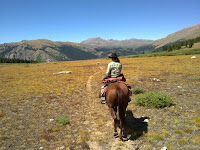 During your research, was there anything that affected the way you wrote the story or where it ended up?
Definitely. I had sketched it out in my imagination before I went, but Las Vegas in particular felt different from how I had assumed it to be. My villain changed as a result – less mafia boss, more dodgy business man with an orange tan like some notable figures in Vegas that I could mention – but won’t – in case they sue!
Did you have any problems changing from the way British people speak to American and did you learn a lot about different sayings etc while researching?
I tried hard to get it right but I expect I hit a few bum notes. I always spot mistakes if I read a book by an American set in England so I don’t imagine I’ll escape as I’ve dared the vice versa scenario. One area of difficulty is that many English teens pick up US terms from TV so there is no absolute divide between the languages. I did ask an American friend about the rules and language of baseball so I think that is correct (‘inning’ not ‘innings’ Old Bean). Any help from real Americans is welcome so I don’t fall in to the same bear traps again! Guys, I tried – honest!
Did you take any character traits for Sky and Zed from people you met while you were researching?

I don’t borrow real people for my books – the characters were themselves from the start. Zed of course is the boy I would’ve liked to go out with at High School, but to be honest, I don’t think anyone to match him existed in Essex where I grew up!


I loved the idea of Savants and soulfinders. Where did the inspiration for this come from? 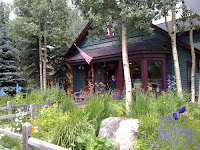 I knew I didn’t want to write about vampires, werewolves, angels – all done to death (and after death) at the moment. So what else leads in to those dark gothic areas that you need for this kind of story? I decided the hidden world of extra-sensory perception was the way to go for me as it has the intimate side of telepathy combined with the battle zone of extra powers where good can fight evil. It’s a kind of grown up magic, isn’t it?
And the idea of soulfinders plays on ‘the one for you’ idea that has been around as long as we’ve had romance in our souls. I liked the concept that you got a gift – your power – but with a massive price tag: your other half is out there somewhere but you had to find him or her. Not everyone succeeds and that leads to bitterness and some very dark places in the soul, but if love wins out, then the gains are even greater by contrast.

I was really interested in the different gifts that Zed's family had. Will we be hearing from any of Zed's brothers in the future?
Oh yes. Next one up is Yves – the hot Harry Potterish one. I’m looking forward to finding the wild child in our restrained bookish Benedict. His soulfinder is suitably out of control and in need of him – the fireworks are going to fly!


Massive thanks to Joss for answering my questions! I can't wait for the next book in this series and to find out more about Zed's brothers as well as meeting Joss on the 27th.

The next stop on the tour is at Girls Without A Bookshelf tomorrow (21st October) so be sure to check it out!
Posted by Lyndsey OHalloran at 00:30

What a fab interview :) Haven't read this one yet, but I'd like to and soon!

Loved this book, thanks for the great interview. Can't WAIT to read the next book in the series!!!

Great interview - I'm really looking forward to the other posts on this blog tour :)