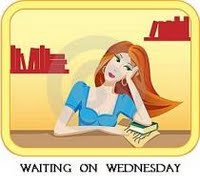 "Waiting On Wednesday" is a weekly event, hosted by Breaking the Spine that spotlights upcoming releases that we're eagerly anticipating.

Ghost of a Chance - Rhiannon Lassiter
Publisher: OUP
Release Date: January 2011
Synopsis:
Last Chance . . . 'You know that girl, the one in my class? The one that died. She lived here.' Lost Chance . . . 'You're dead, Eva Chance. You died and nobody noticed. You died and nobody cared.' No more Chances left . . . They said it was suicide, but Eva knows she was murdered. Now she inhabits a sinister spirit world along with the tortured and malevolent ghosts of her ancestral home. Solving the crime could end her existence - but if the killer isn't found how many more will die?
After the OUP I went to and heard Rhiannon read from her book, I knew it instantly that it was one that I wanted to read. OUP have some fantastic sounding books coming out next year!
Posted by Lyndsey OHalloran at 00:30

Oh yes, this is one I would definitely be interested in.

Yay I can leave you comments :D
I love the sound of this one too

Agreed! I've been looking forward to this one since I heard that reading too. It sounds so chilling and eerie. Great pick.

I was looking forward to reading this one too, but found it to be not was I was hoping for. Oh well... :(